The Independent
Institute of Advanced Degrees
is a JOKE... 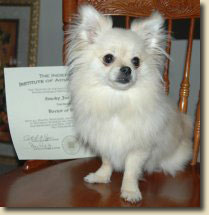 ...and so are YOU if you believe an Honorary Doctorate,
or a so-called Earned Doctorate from a Diploma Mill, makes you a real Doctor !

Did our little put-on appeal to your pride and ego?
Were you secretly hoping there was a way you could easily get a Doctorate?


It is deception, fraud, and dishonest for someone to pretend they are something they are not.

If the world recognizes this, WHY CAN'T YOU?
Why do you give those of the world reason to MOCK Fundamentalism because of your phony Doctorate?
Why do you flatter yourself with what you know to be at its very best a half-truth?

What has possessed you to boast of something you do not have and did not earn?

Do you not realize covetousness is a grave sin in the sight of God?
Are you so filled with pride and ego that you cannot see the error?
Do you actually believe your fraud is not deception and does no harm?

When your author was first saved in 1980 he was a neophyte and ignorant of the most simple things concerning the Scriptures and Christians. He read everything he could get his hands on trying to learn. Eventually he began reading Fundamentalist literature (he was raised a Methodist) and took note of the Doctors who authored some of the works. The neophyte actually believed they were Doctors by gaining the academic education. They used the prefix "Dr." before their name freely and openly. The poor simpleton did not then realize he was being deceived by some of these authors before he even opened their books.

A few years later he learned of the Fundamentalist concept of the Honorary Doctorate and realized how he had been hoodwinked by the very people who claimed they were revealing the truth. This revelation had a negative effect on the once neophyte. He began to think Fundamentalism was a sham like all the others.

One glaring difference between the modernistic Mainline denominations (including the Roman Catholics) is they will not partake in such fraud in spite of their obvious error and weaknesses. How many times have your heard a Methodist, Episcopalian, Presbyterian, Lutheran, or even a Reformed minister claim he is a Doctor or allow others to call him such when he did not have an EARNED Doctorate? Can you name some? Yet among the Independent Baptists it a common occurrence. This is a tragedy. Are there no leaders in Fundamentalism that will take a stand for truth and honesty or are they all too busy receiving their phony doctorates? Fundamentalism is regarded by the world the same as Charismatics and "Christian Kooks" in this pretense.

This is a reproach against Fundamentalism. When someone challenges the integrity and honesty of a minister who parades a fake doctorate to your author, he must agree with them. The Fundamentalist a may have large, "successful" ministry and have done a considerable amount of good, but in at least this one respect, their pride and conceit are revealed and counteract all the good in the mind of the lost and many saved. Yes, there is much harm done.

Here is a list of some in the secular world who hold Honorary Doctorates. The list is filled with vain and egocentric people, but almost none of these have the unmitigated gall to seriously consider themselves a Doctor. Not even jailbird Mike Tyson. They know they would be a laughing stock. Ah, but give one to a Fundamental Baptist Preacher and he will run with it. What a sickening shame.

Some of the most caustic, acrid, flesh inspired letters we have received have been in response to a little article that was one of our first Taboo Topics. Your author wrote Preachers and Honorary Doctorates as a response to the great surge of preachers seeking these phony diplomas so they can be a "doctor." This practice is a blight on the face of Christianity. Christ hit very close to the motive of this practice with His words, "[They] love the upperemost rooms at feasts, and the chief seats in synagogues and greetings in the markets, and to be called of men, Rabbi, Rabbi [Doctor, Doctor]" (Matt. 23:6-7), but these words seem to have no affect on their actions.

Once while doing a little more research on these phony doctorates we stumbled upon a website that clearly showed the harm this dishonest, deceptive practice is causing. Many of you are probably familiar with Walter Martin and his book "Kingdom of the Cults." We have had the book for years and it is a good reference on cults and their doctrines. However, someone was using some of Martin's material to confront some Mormons and their satanic cult and a Mormon apologist learned that Martin's degrees were honorary or "bought." [Martin claims to have gotten his "doctorate" from California Western University, but we can find no reference that such a school exists on the Internet.] This destroyed Martin's credibility, not only among some Mormons who may have been considering his words but others. Do you know what is really sad? These deceived Mormons who believe Christ and Lucifer are brothers and other outrageous heresies can clearly see the ethical deception promoted by Fundamentalist preachers and "scholars" in tauting their phony degrees! Look at some of the words of this Mormon which can be found in its entirety here.

It is a sad day when cultic Mormons have a better grasp of ethics, personal integrity, and morality than many born again Fundamentalist ministers. A very sad day.

Honorary and phony "earned" doctorates are easy to obtain. We have received several emails offering to give us a Ph.D "earned" by "life experience" for a fee. If a minister can't find a preacher-buddy who will give him one for free, he can always buy one of these. Click on this link to see what the World Net Daily, a conservative news site, has to say about phony degrees among government workers. They are a joke to the world, to the lost, and to cults, but they are as serious as the cross to many Baptists and Fundamentalists. There is no need to bring such pretense, deception, and reproach upon the work and ministry of the Lord Jesus Christ. No need except to feed the bloated egos of those like ...Diotrephes who loveth to have the preeminence (3 John 9).

Exposing the honorary doctorate deception among a growing number of Fundamentalist preachers has been eventful for us to say the least. We have received letters, phone calls, and emails expressing "concern" over my treatment of this issue. One preacher with an honorary doctorate from an unknown "institute"  began to openly identify his "doctorate" as honorary. Good. Another said he did not want to put his "degrees" after his name anymore after reading the article and realizing it could cause an ethical problem. Better. But others wish to cling to their beloved "doctorate" with a passion. They don't worry about the harm their self-serving tactics may bring to the cause of Christ, their main worry is their secret may be exposed by a "nobody from nowhere" like us. So be it.

Think for a minute, brother. What does your Honorary Doctorate benefit but your pride and ego? Regardless of what you may think, it is of no benefit to your ministry (though that may be an excuse you used to get it); it is of no benefit to your congregation (the prudent will realize it is worthless); and it is fraud and deception to the lost (thus irrepairably damaging your evangelistic ministry). Why would any rational minister want something that is such a hindrance and can bring nothing but reproach upon the name of his Savior? When pride cometh, then cometh shame... (Pro 11:2)

Fundamentalist Preacher, if you have an Honorary Doctorate, fine. But, please, for the sake of Christ and His ministry and for the sake of truth and honesty, don't pretend your honor is a true doctorate. You bring a reproach upon the work of Christ if you do. Just hang the diploma in your study, treating it as the novelty it is, and go on with your ministry. Don't let your ministry be marked with deception and pretense by calling yourself a doctor, because sooner or later, you will be exposed.